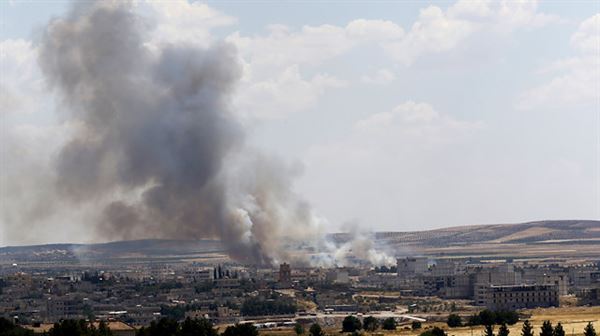 At least three Russian servicemen were injured in a bomb explosion in northern Syria on Monday, the Russian Defense Ministry said. The incident occur

At least three Russian servicemen were injured in a bomb explosion in northern Syria on Monday, the Russian Defense Ministry said.

The incident occurred when an improvised explosive device detonated during regular joint patrols by Turkish and Russian forces near Ayn al-Arab in Aleppo province, the ministry said in a statement.

The servicemen were provided with medical assistance and they are out of danger, the ministry said.

On Oct. 22, Turkish President Recep Tayyip Erdogan and his Russian counterpart Vladimir Putin signed a deal under which YPG/PKK terrorists will pull back 30 kilometers (18.6 miles) south of Turkey’s border with northern Syria, and security forces from Turkey and Russia will conduct joint patrols 10 km (6.2 miles) from the Turkish border.

In its more than 30-year terror campaign against Turkey, the PKK — listed as a terrorist organization by Turkey, the U.S. and the European Union — has been responsible for the deaths of 40,000 people, including women, children and infants. The YPG is the Syrian offshoot of the PKK.