The daughter of jailed Uighur rights activist Ilham Tohti accepted a European Parliament prize on his behalf on Wednesday, urging lawmakers in an add 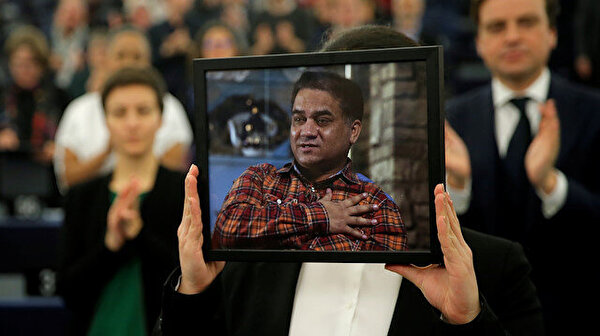 The daughter of jailed Uighur rights activist Ilham Tohti accepted a European Parliament prize on his behalf on Wednesday, urging lawmakers in an address not to be “complicit in the Chinese persecution of the Uighur people”.

China has come under increasing international scrutiny for cracking down on the Muslim Uighur minority in its northwesterly Xinjiang region.

Tohti, an economist, was jailed for life in China in 2014 on separatism charges that were widely denounced in Western capitals.

His daughter, Jewher Ilham, urged politicians, academics and students on Wednesday to protest against the treatment of the Uighurs as she accepted her father’s Sakharov Prize for defence of human rights at the parliament in Strasbourg.

Independent German researcher Adrian Zenz, an expert on China’s ethnic policies, estimated in March that 1.5 million Uighurs and other Muslims had been or were being detained in so-called re-education centres in Xinjiang.

After Tohti’s prize was announced in October, China said he was “a criminal who was sentenced in accordance with the law by a Chinese court”, and urged that “all sides respect China’s internal affairs and judicial sovereignty and not inflate the arrogance of terrorists”.

Two weeks ago, the U.S. House of Representatives gave initial approval to a bill that would require the U.S. administration to toughen its response to China’s crackdown.

In Strasbourg, European Parliament president David Sassoli said: “By awarding this prize, we strongly urge the Chinese government to release Tohti and we call for the respect of minority rights in China.” ($1 = 0.9073 euros)