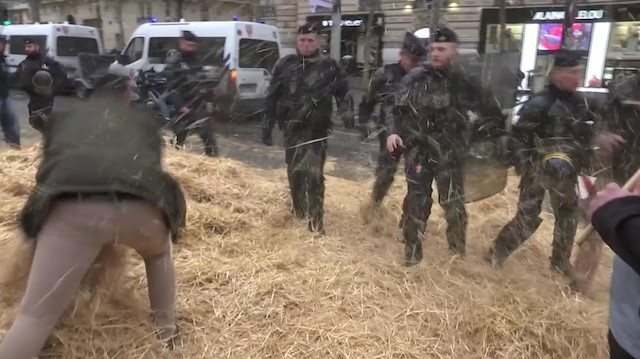 French farmers angered by government policies that they say threaten their livelihoods drove convoys of tractors into Paris on Wednesday, obstructing

French farmers angered by government policies that they say threaten their livelihoods drove convoys of tractors into Paris on Wednesday, obstructing commuter traffic and adding to the social unrest facing President Emmanuel Macron.

Up to a thousand tractors rolled into the city from the north and south, at times blocking motorways and the inner ring-road, honking horns and flying the flags of the two main farm unions staging the protest.

In the city centre, farmers threw hay across the boutique-lined Champs-Elysees Avenue and occupied the lanes headed towards the Place de la Concorde square. Riot police urged the farmers to disperse.

“”Macron, answer us! Save farmers,” read one banner carried by a tractor rolling down the A1 autoroute.

Farmers’ unions are demanding a meeting with Macron to express grievances over policies that they say are hurting agriculture and threatening their livelihoods, such as the phasing out of the common weedkiller glyphosate.

A food law passed by Macron’s government, which aimed to give farmers a fairer share of profits, has failed to dispel their discontent over modest revenues.

Agriculture Minister Didier Guillaume defended the government’s record, saying the law would help once it had more time to have an impact. City dwellers and environmentalists should stop denigrating farmers, he told Europe 1 radio.

Dozens of French farmers threw hay across the boutique-lined Champs-Elysees Avenue and occupied the lanes headed towards the Place de la Concorde square. French farmers angered by government policies that they say threaten their livelihoods drove convoys of tractors into Paris on Wednesday, obstructing commuter traffic and adding to the social unrest facing President Emmanuel Macron.

The protest was similar to a blockade carried out by Irish farmers in Dublin on Wednesday, although the two events were not coordinated.

Macron, 41, has faced discontent against his social and economic reform agenda across French society.

His government last week announced emergency financing in a failed attempt to head off further hospital strikes and has been locked in negotiations with unions this week over pension reform ahead of nationwide transport strikes on Dec. 5th.

Resentment among farmers has been growing at what they call “agri-bashing”, or criticism of agriculture over issues ranging from pesticide use to animal welfare.

Attacks on livestock farms and butcher’s shops by vegan activists have caused particular outrage. Longstanding tensions with environmental associations have meanwhile deepened amid debates about banning glyphosate and restricting pesticide use near residential areas.

“We’re the new scapegoats. As soon as something goes wrong, it’s the farmers’ fault,” Jean-Yves Bricourt, leader of the main FNSEA union in the administrative department of Aisne, told Reuters. “We’re treated like criminals.”

Farmers widely blame Macron for rushing to ban glyphosate by 2021, going beyond current European Union policy, although the government has promised exemptions for farms that have no viable alternative.

Macron has also been under pressure from farmers over EU trade deals with Canada and the Mercosur bloc of South American countries, which farming groups say will usher in imports of cheaper agricultural goods produced to lower standards.

France is the largest agricultural producer in the EU and the biggest beneficiary of subsidies under the EU’s Common Agricultural Policy.