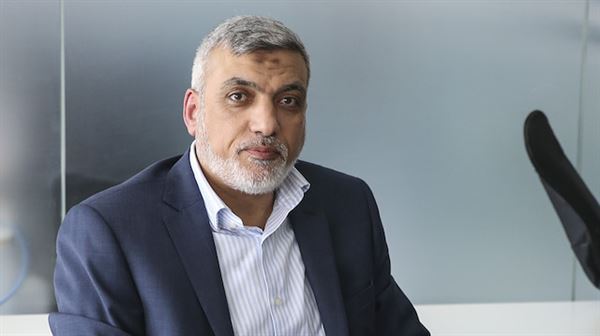 The presence of terror groups along Turkey’s borders serves to promote Israel’s interests, said a senior Hamas leader. In an interview wit

In an interview with Anadolu Agency, Izzat al-Rishq said that Israel benefits from the presence of these groups, as their only aim is to “threaten Turkish internal security and stability.”

“Turkey has the full right to defend itself and to protect its borders from any external threats or terror groups,” Al-Rishq said, referring to Turkey’s ongoing anti-terror operation in northern Syria.

“Turkey has no hostile stance towards the Syrian people, neither Arabs nor Kurds,” he went on to say.

On Syria’s territorial integrity, the Hamas leader said: “We are very confident that President Recep Tayyip Erdogan has no bad ambitions in Syria as he is keen on maintaining his country’s peace and security.”

Turkey on Oct. 9 launched Operation Peace Spring to eliminate terrorists east of the Euphrates in order to secure Turkey’s borders, aid in the safe return of Syrian refugees, and ensure Syria’s territorial integrity.

Ankara wants to clear northern Syria east of the Euphrates River of the terrorist PKK and its Syrian offshoot, the YPG.

In its more than 30-year terror campaign against Turkey, the PKK — listed as a terrorist organization by Turkey, the U.S. and the European Union — has been responsible for deaths of 40,000 people, including women, children and infants.

Al-Rishq also praised Turkey’s support for the Palestinian cause.

“We highly appreciate the Turkish [government and people] for their supportive stance towards Palestinian people and their genuine rights,” he added.

Al-Rishq said that his movement has asserted on various occasions that “we hope the Islamic world ends their ongoing conflicts soon with a view to focus on the main challenge being faced by the Islamic countries, which is Zionism.”

Asked about recent incidents at the flashpoint al-Aqsa Mosque, al-Rishq said: “Zionist terror continues as it targets the Palestinian holy places in the occupied Jerusalem, and most recently the Israelis’ incursions for al-Aqsa Mosque’s compound.”

“We call on Palestinians in Jerusalem to repulse these incursions,” he said, adding: “Israel, for a long time, has been aiming for the spatial and temporal partitioning of the holy mosque.”

“This is a clear provocation not only for the Palestinian people but for the whole Muslim world,” the Hamas leader said.

On Wednesday and Thursday, hundreds of Jewish settlers forced their way into Jerusalem’s flashpoint Al-Aqsa Mosque compound, to mark the Jewish holiday of Sukkot, according to a Palestinian agency.

“Around 515 extremist settlers backed by Israeli police stormed the Al-Aqsa compound since early morning [Thursday],” the Religious Endowments Authority, a Jordan-run agency responsible for overseeing the city’s Muslim and Christian holy sites, said in a statement.

According to the statement, the number of settlers who stormed the compound on Wednesday topped 900.

Sukkot is a weeklong holiday which started Sunday evening and will continue until next Sunday.

For Muslims, Al-Aqsa represents the world’s third-holiest site. Jews, for their part, refer to the area as the “Temple Mount,” claiming it was the site of two Jewish temples in ancient times.

Israel occupied East Jerusalem — in which the Al-Aqsa is located — during the 1967 Middle East War. It formally annexed the entire city in 1980, claiming it as its capital — a move never recognized by the international community.