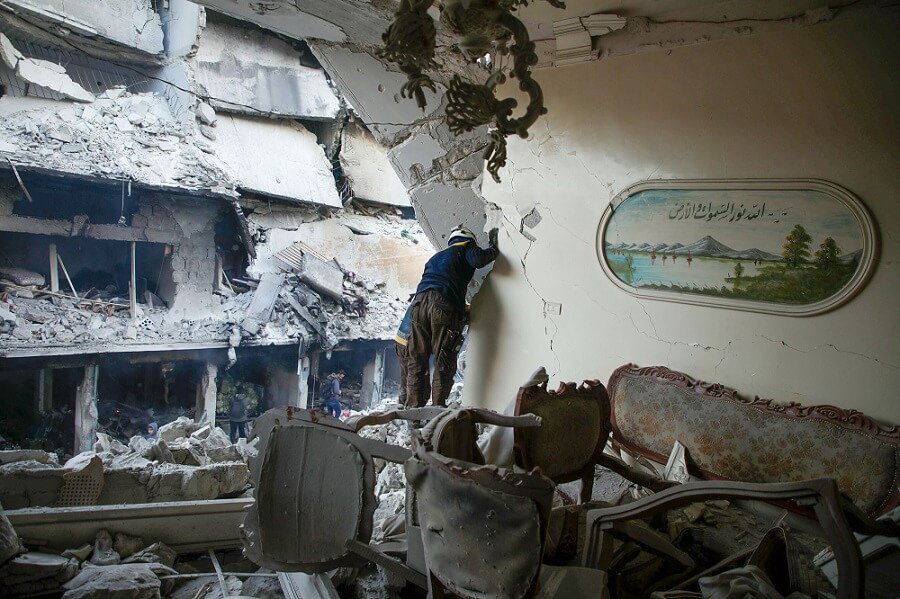 The Grozny model is a tactic based on the sequence of occupy, annihilate, and rule. This model was adopted by the Russian Federation in the two wars i

The Grozny model is a tactic based on the sequence of occupy, annihilate, and rule. This model was adopted by the Russian Federation in the two wars it waged against Chechnya in North Caucasus in 1994 and 1999. It is originally inspired from the Nazi Germany’s Blitzkrieg method against the Soviet Union during World War II. The Grozny model relies on breaking the adversary’s line of defence with sudden and swift attacks, annihilating the targeted area, and forcing the opponent forces to surrender through blockade. This entered among the fighting tactics used by Russia especially against guerilla combat.

With the dissolution of the Soviet Union in 1991, its 15 constituent republics declared independence, which set an example for Chechnya. In 1994, Chechnya sought independence under the leadership of Dzhokhar Dudayev, but Moscow formed an opposition and supported them in military and political terms in order to hamper the independence movement, which fomented the Russian-Chechen conflict. The conflict between Moscow and Grozny lasted around 12 years, with the exception of a three-year ceasefire, and caused widespread devastation.

Firstly, during the First Chechen War that went on for two years, Russia under Boris Yeltsin’s rule did not yield tangible results although it had a major superiority over Dudayev’s Chechnya. In the clashes that took place around Chechnya’s capital Grozny, Russia suffered from its lack of experience in the face of the guerilla war and was caught off-guard by the abrupt attacks organized by its enemy. During the two-year period until the ceasefire of 1996, tens of thousands were killed, around 500,000 people were displaced, and many cities, particularly Grozny, suffered great damage.

The foundations of the Grozny model, which still in the present day is a preferred method, were laid in the First Chechen War. However, the first war where this tactic was fully applied and yielded tangible results was the Second Chechen War. The failure in the First Chechen War did not only pave the way for the second war, but also played a significant role in Vladimir Putin’s becoming the president of Russia. Having gained experience in the guerilla methods, this time, the Russian military almost destroyed Grozny, killed many critical names of the insurgency including Shamil Basayev, and forced the insurgents either to escape or surrender by besieging the region for a long time. Moscow finally appointed a pro-Moscow government head (Akhmad Kadyrov and his son Ramzan Kadyrov as his successor) who could keep the Muslim population under control and prevent other regions from following a similar path.

Inasmuch as the Grozny model is inspired from the Blitzkrieg tactic, these two models actually differ in terms of the time-result dimension. The Grozny model prioritizes obtaining long-term and permanent results in the regions it is applied, and if necessary, allows for the damage or the siege to be used as a trump card against the target country or region. Now, we observe that Russia is implementing the Grozny model in the Syrian war, especially in Idlib.

There are multiple facts that demonstrate that the Russian military action in Syria carries marks of the Grozny experience. Two cases are particularly noteworthy, namely Aleppo and Idlib. In addition, the same model was also employed in Homs and Ghouta, but the cases of Aleppo and Idlib are more significant due to their overall importance, effects, and outcomes. The Assad regime and its allies couldn’t achieve any progress in the first four years of the war. As in the First Chechen War, the regular army could not overcome the guerilla tactics until Russia’s involvement in 2015.

With Russia’s involvement, the balances in the field started to change in favor of the Assad regime, and Aleppo ended up being under the regime’s control owing to Russia’s support. Russia applied the Grozny model in Aleppo. Firstly, Russia’s intense air attacks broke the blockades of the opposition forces, cut off the supply lines extending to Aleppo from the north and Azez, and ravaged a number of areas. Subsequently, the pincer movement gained momentum and the only land route leading up to the region was rendered unusable through heavy shelling. Lastly, the region, which was completely besieged and disconnected from all the supply lines, became an unlivable place as a consequence of increasing air bombardment and shelling. The opposition forces gradually receded after suffering heavy losses and the regime ultimately seized control. Looking at the record of this war that lasted over four years, we see that more than 23,000 civilians were killed, the region was completely ravaged, and its population was displaced. By applying the Grozny model in Aleppo, Russia got what it wanted once again through massive devastation.

Another location where Russia nowadays implements the Grozny model is Idlib. As in Grozny and Aleppo, Russia and the regime forces are gradually rendering the opposition forces ineffective and seizing control. Housing around 4 million people, Idlib is one of the most war-torn regions in Syria, and both receives and sends the highest number of immigrants in the country. Idlib’s position is rather different from Aleppo’s in terms of population density and the configuration of opposition forces in the region. In order to break the resistance of anti-regime forces across the country, Moscow attaches a particular importance to Idlib, a stronghold of the opposition forces.

The balance of power in Idlib started to change as it did in Aleppo in 2015 as Russia started heavy air bombardment and shelling. But despite this, the field dynamics and Turkey’s role as an active power in the region prevented the regime forces’ seizing full control of Idlib. Russia’s air attacks increased, in line with the first step of the Grozny model, causing the displacement of millions of locals. Meanwhile, on May 4, 2017, due to the growing conflicts, Turkey, Russia, and Iran signed a deal to create safe zones inside the Idlib province. This deal, however, did not stop Russia and the regime forces. Inhabited spaces including safe zones were ravaged and the civilian population had to flee.

The humanitarian crisis in Idlib became a key subject in the diplomatic relations between Turkey and Russia. As a result, the two countries agreed to create a demilitarized zone on September 17, 2018. But this agreement, too, did not prevent Russia’s air attacks, and the devastation continued. In addition, Russia and the regime forces continued their military advance through the blockading of land. Murak and Suman are two examples, along with similar military advances from Karati and Katrah to Carcanaz. Furthermore, advances and retreats from Katrah, Barnan, and Istabalat towards the west and north were experienced and severe clashes took place. Eventually, the number of displaced people reached around 1.6 million. As of November 2019, 310 civilians have been killed whereas the material damage in Idlib has exceeded $320 million. The infrastructure and superstructure of the region have become unusable and life has come to a halt.

Deliberately causing severe damage in Idlib has other purposes as well. Especially recently, Russia has been planning to trigger massive flows of refugees which it aims to use as a card against the neighboring countries. Millions of displaced people eventually threaten the internal stability of host countries and pose a security threat. Russia wants to use this card at the negotiation table.

The Grozny model is an occupy, annihilate, and rule tactic. Russia formerly applied this in Chechnya, and now it plans to control Syrian dissidents by employing this model. Russia implements the same model to entire Syria in order to protect Assad and to eliminate threats that might undermine Russia’s political and commercial interests in the region in the long run. But the outcome of the model is the same everywhere: hundreds of thousands of displaced civilians, tens of thousands of casualties, and a whole slew of destroyed cities. Despite being disgraceful in humanitarian terms, Moscow’s Grozny model continues to create advantages for Russia and its allies, and stands out as an instrument in realizing Russia’s long-term goals.